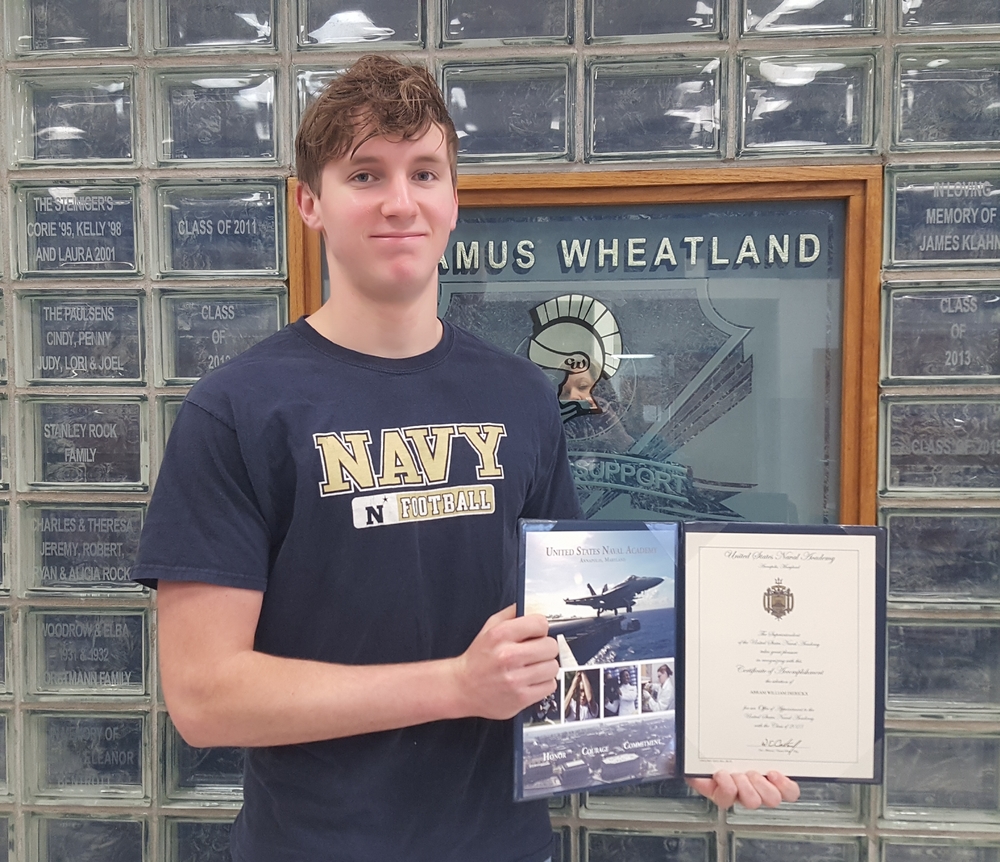 Abram William Dierickx, 2019 Calamus Wheatland graduate, son of James and Pam Dierickx, has accepted a Congressional Appointment to the United States Naval Academy in Annapolis, Maryland.  Abram knew at a young age that a life goal of his was to be a commissioned military officer and he worked hard to achieve his dream.

In April of 2018, Abram applied to the Naval Academy and was invited to week long training sessions that summer.  In June he attended the Naval Academy Summer Seminar, Annapolis, MD.  During July Abram was one of 200 students selected to attend the Marine Corps Summer Leadership and Character Development Academy, Quantico, VA.  After the Marine Corps session is when Abram decided to pursue this career path and finish the application process.

During the next few months letters of recommendation were submitted on Abram’s behalf by his teachers, community members, Congressman Dave Loebsack and Senator Joni Ernst.  High school and college course transcripts, testing and ACT test scores, extra-curricular involvement, community service volunteer project documentation and artifacts were also included in the application process.  The next steps in finalizing the process included his medical clearance and an interview with a Blue and Gold Officer.

On January 31, 2019 Abram accepted the Offer of Appointment to the United States Naval Academy’s Class of 2023.

James Dierickx stated that all this is happening fast, graduation and boot-camp, and that the family is so proud of him doing the right thing in high school and life.  “This was a long process, but so proud that he was accepted to the Naval Academy.  The family will miss seeing him as Abram’s visits home will be short and few the next few years, but we will travel to Annapolis to see him as much as possible”.

Abram will report for duty in Annapolis, Maryland on June 27, 2019 and complete six weeks of boot-camp/training.  Upon graduation from training the coursework at the Naval Academy, one of the premier post-secondary institutions in the country, will begin.  By the end of freshman year Abram will choose a major, and by the end of junior year he will give his top three choices of where to serve in his officer role.

Upon graduation with the Class of 2023, Abram will be a commissioned officer with either the Navy or Marine Corp and will serve at least five years in this role.