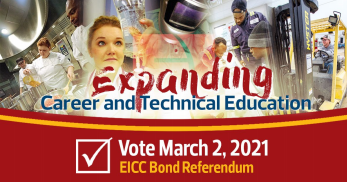 Exercise your right to vote by going to the polls March 2nd. Voters will be asked to consider a bond referendum for new Career and Technical Education labs and expansion of existing classroom buildings to support EICC’s Career and Technical Education programs, and Career Academies for both adult students and high school students. See what new programs will be supported through the referendum at eicc.edu/referendum.  Eastern Iowa Community College's press release may be viewed here: EICC press release on bond referendum

New and renovated facilities will be used to support EICC’s Career and Technical Education programs, including high school Career Academies. If approved, the levy will replace the college’s previous levy that is ending, resulting in no net increase in property taxes from those levied over the past decade.

The Eastern Iowa Community College is a recipient of a $1,000,000 Career & Technical Education grant from Governor Reynolds and the Iowa Dept. of Education.  Read the
press release here: CTE $1M grant to EICC